Helping you understand menopause without worrying about or saying the wrong thing. 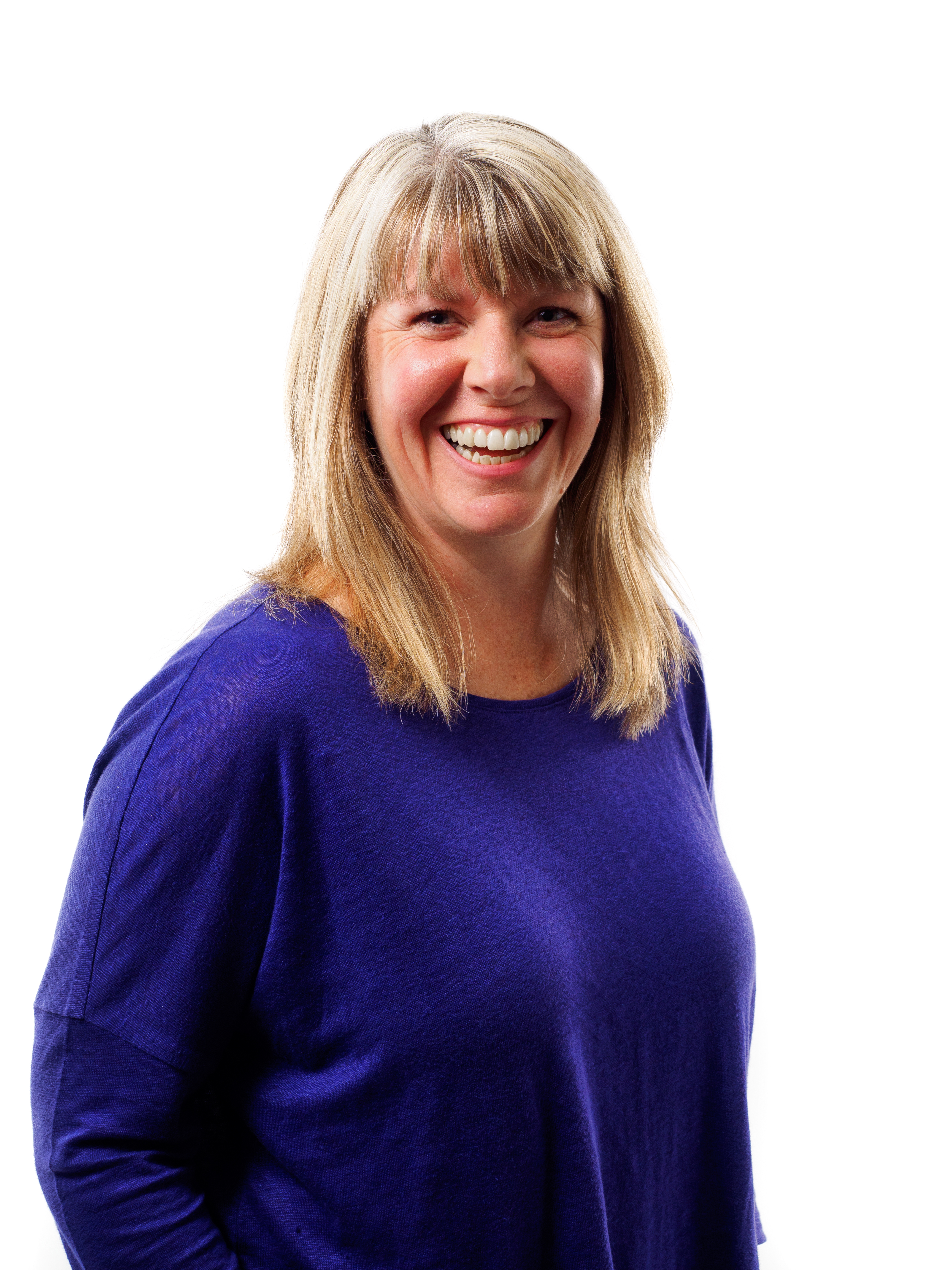 Can perimenopause and menopause affect the mental health of your colleagues in the workplace?

The symptoms of perimenopause and menopause can also be psychological and can cause:

In this blog, I'm going to share the psychological symptoms of perimenopause and menopause, the varying degrees of severity of the symptoms and how these symptoms have affected women in the workplace.

How common are psychological symptoms with menopause?

The psychological symptoms associated with the menopause such as loss of self-confidence, low self-esteem, anxiety and depressive symptoms are the ones that often affect women the most.

Why does the menopause cause psychological symptoms?

The perimenopause and menopause is due to the body adjusting to the decline in levels of the hormones oestrogen and progesterone.

And this decline and change can trigger physical changes and psychological changes.

A lack of sleep can cause an increase in tiredness and fatigue which can then trigger stress and anxiety. What often happens is a vicious cycle of physical and emotional symptoms are created. 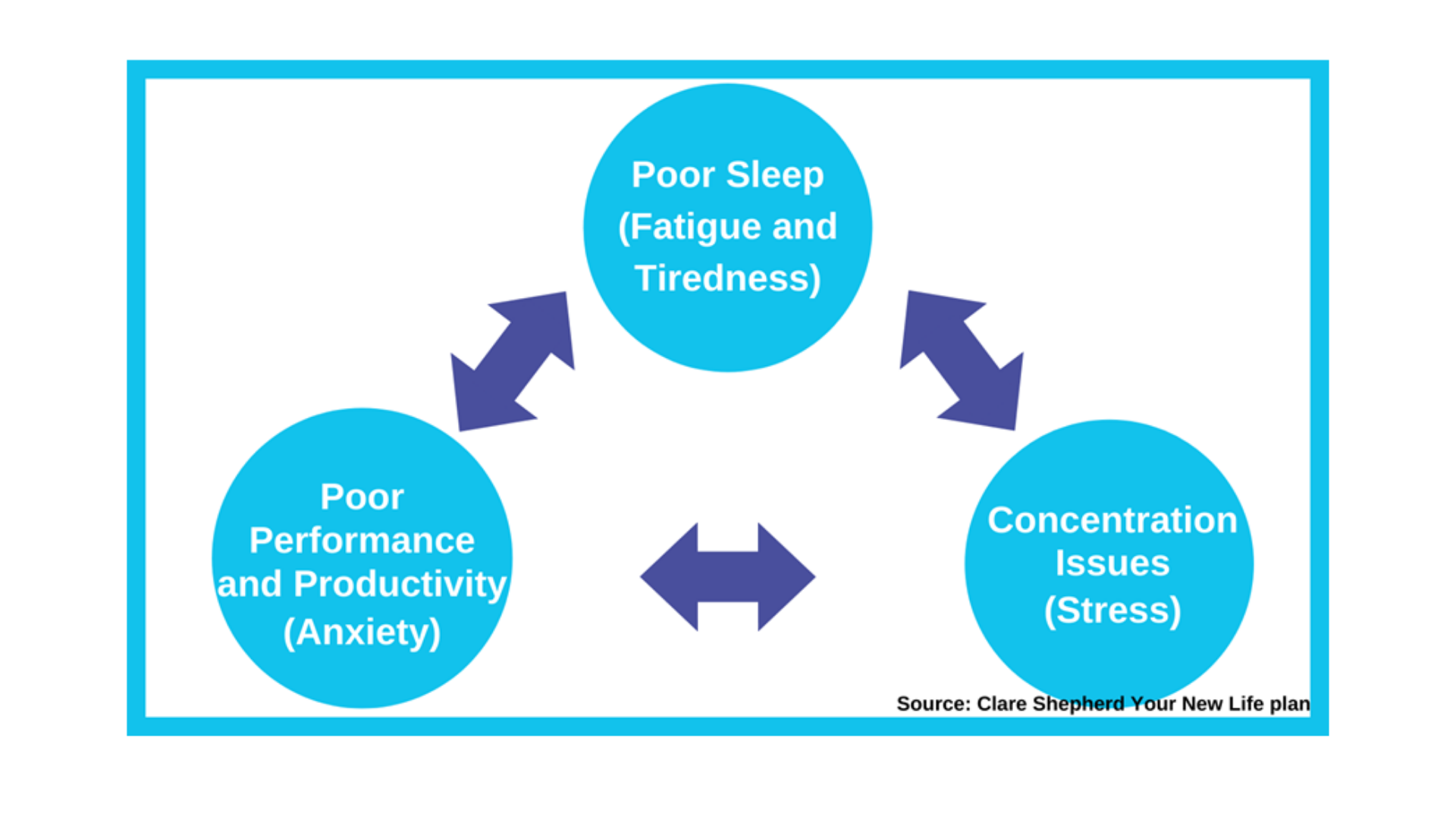 How long can symptoms affect women?

Symptoms can begin from the age of 40 but can happen earlier.

The average length of time is four years but many women still have some symptoms for longer than ten years.

There’s also surgical and medical menopause to consider too.

Medical or induced menopause is when a woman stops producing eggs and her menstrual cycle ceases prematurely due to certain medical treatments, such as chemotherapy and surgery. Unlike with natural menopause, which can take years, this process either occurs over a short period of transition time or abruptly, depending on the cause. Likewise, the cause of medical menopause determines if it is temporary or permanent.

What is surgical menopause?

Surgical menopause results from a woman having both ovaries removed, in an operation known as a bilateral oophorectomy.

Check out our A guide for Managers: What you need to know about surgical menopause written by Helen Kemp, author of 'Not your typical menopause'.


Will the symptoms be severe for everyone going through peri-menopause or menopause?

The answer is no. For some the peri-menopause and menopause will happen and they’ll comfortably be able to manage their symptoms.

For some, their symptoms range from moderate to extremely problematic.

It was found that work could be responsible for making peri-menopause and menopause symptoms worse.

The Menopause Survey 2018 highlighted that: 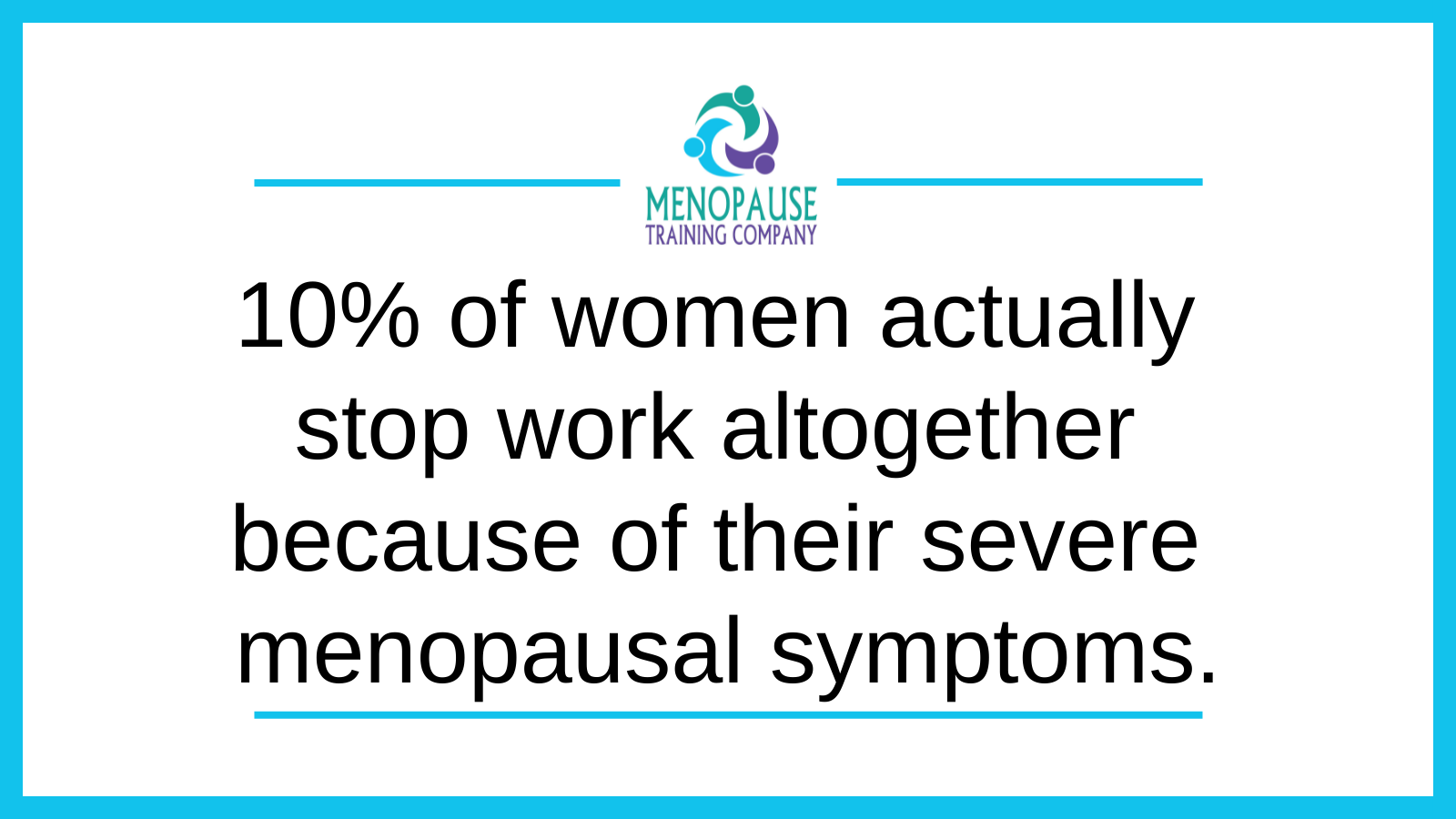 Is it obvious that these symptoms are caused by perimenopause or menopause?

Perimenopause and menopause symptoms can also, frustratingly, be caused by other conditions.

For many, they won’t recognise their symptoms are caused by perimenopause or menopause.

So they won’t talk about it

For some, they may have symptoms but their periods remain regular which leads them to think it can’t be perimenopause or menopausal. They may have never heard of peri-menopause symptoms so don’t make the connection.

Or they do recognise it’s menopausal and they’re uncomfortable talking about it so say nothing.

Why it's important we talk about menopause in the workplace

How many women may be affected in the workplace?

What is the impact of menopause in the workplace?

According to a 2017 UK Government report, the impact of menopause on women’s economic participation includes: 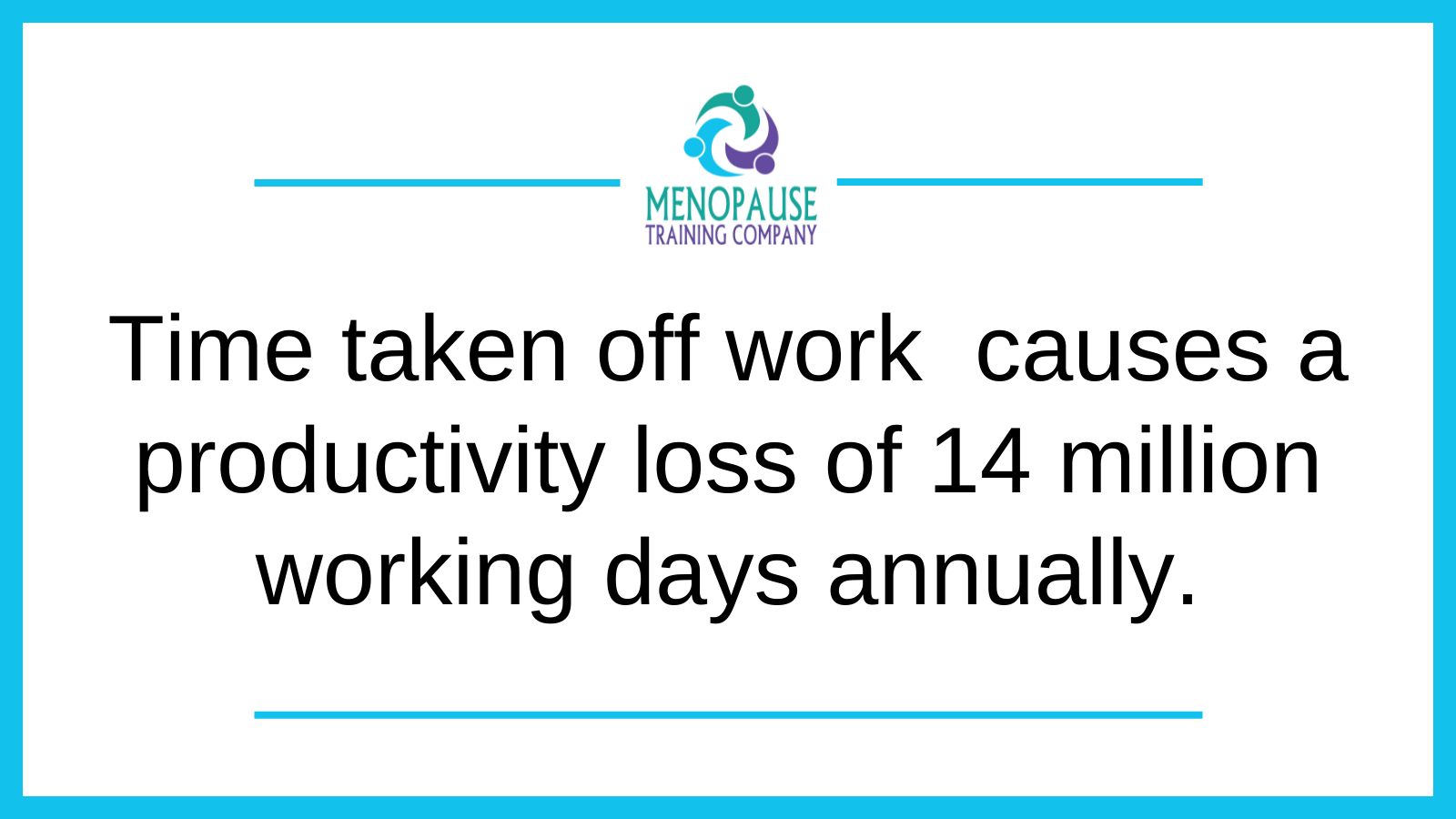 What do women say about their psychological symptoms and how they affected them?

“I was marketing director for an international company and had enjoyed a stellar rise to the top. I started as a marketing exec, moved to a new firm as my career progressed, and then was asked to come back to my old company again, but this time as a director.

I loved my job. I was well-known in tech circles - my reputation was good and I was often asked to speak at events or sit on panels. I was known to be firm but fair and got on with both the creative and commercial people in my industry. I was proud that I could juggle multiple projects and teams in different countries and was known for my calm manner and my resilience - I was very good in a crisis. Everything was going in the right direction.

I can’t quite pinpoint when it started, but I know that over the space of about six months I went from looking forward to work in the morning to finding it all a bit too hard. Obviously, I know there are peaks and troughs in any job, but the trough seemed to be lingering and the peaks were fewer.

My sleep - always pretty good - was disturbed. I was waking at 3am, my head whirring and I felt constantly anxious. I tried all the remedies - warm baths, lavender, pillow mists – but nothing helped and within a few days I could feel this affecting my work. And I was grumpy. It wasn’t just the lack of sleep – I felt as if I had lost my ‘charm’. I’d always had a good way with people but that seemed to have vanished. And while I wasn’t a big drinker, I found my tolerance to alcohol had disappeared. One glass of wine to relax and chew the fat with a colleague went straight to my head and made me feel awful the next day.

But it wasn’t just my sunny disposition that had gone behind a cloud – my professionalism slipped and I couldn’t work out what was happening. I felt like I was on a constant ‘go-slow’, like the Duracell Bunny just as it was about to run out. Tasks and project maps that were second nature to me suddenly took ages to do and I couldn’t focus. I was constantly distracted and ‘foggy-headed’.

And then there was the rage. I remember one management meeting where we were discussing a new product. The developers broke the news that due to some beta testing glitches, the launch date would be delayed. This was unfortunate but not unusual in our industry, and dealing with something like this was one of my strengths – I would usually sympathise with the developers and start replotting my dates. This time though, I erupted. Why couldn’t they just keep to time? The rest of us could. Didn’t they understand the repercussions, the relationships we had pulled on, the events planned? I was screaming with rage. It wasn’t that any of the things I was saying were unfair but my anger was an explosion. But the thing is, I felt totally rational - as it happened and after, I felt 100 per cent justified and believed it came from a passion for my work. Now I realise it was irrational, extreme and most likely hormonal.


“I found it very difficult at times,” says Helen. “There were occasions I thought I was losing my mind. I was exhausted all the time and couldn’t order my thoughts and I had pain throughout my body and aches in my joints.

For Helen, like for many women, symptoms first occurred in the perimenopausal stage during her 40s, several years before the start of the menopause.

“Things would take me longer to do, like writing up clinical notes,” Helen continues. “I’d feel more emotional and have trouble remembering simple things like what I needed to buy when I was out shopping. There were times when I’d start a sentence and then forget where I was going with it. This happened in a meeting once and, when you feel you’re not being as professional as you’d want to be, it really affects your confidence.

PREFER TO WATCH OUR VIDEO? WATCH IT HERE

Want to understand more about how the menopause affects mental health?

How can menopause affect your mental health

Perimenopause cost me my job

Want to understand more about menopause in the workplace?
Menopause Training | Menopause In The Workplace: A guide for managers

Menopause: Why is it an important issue for the workplace? 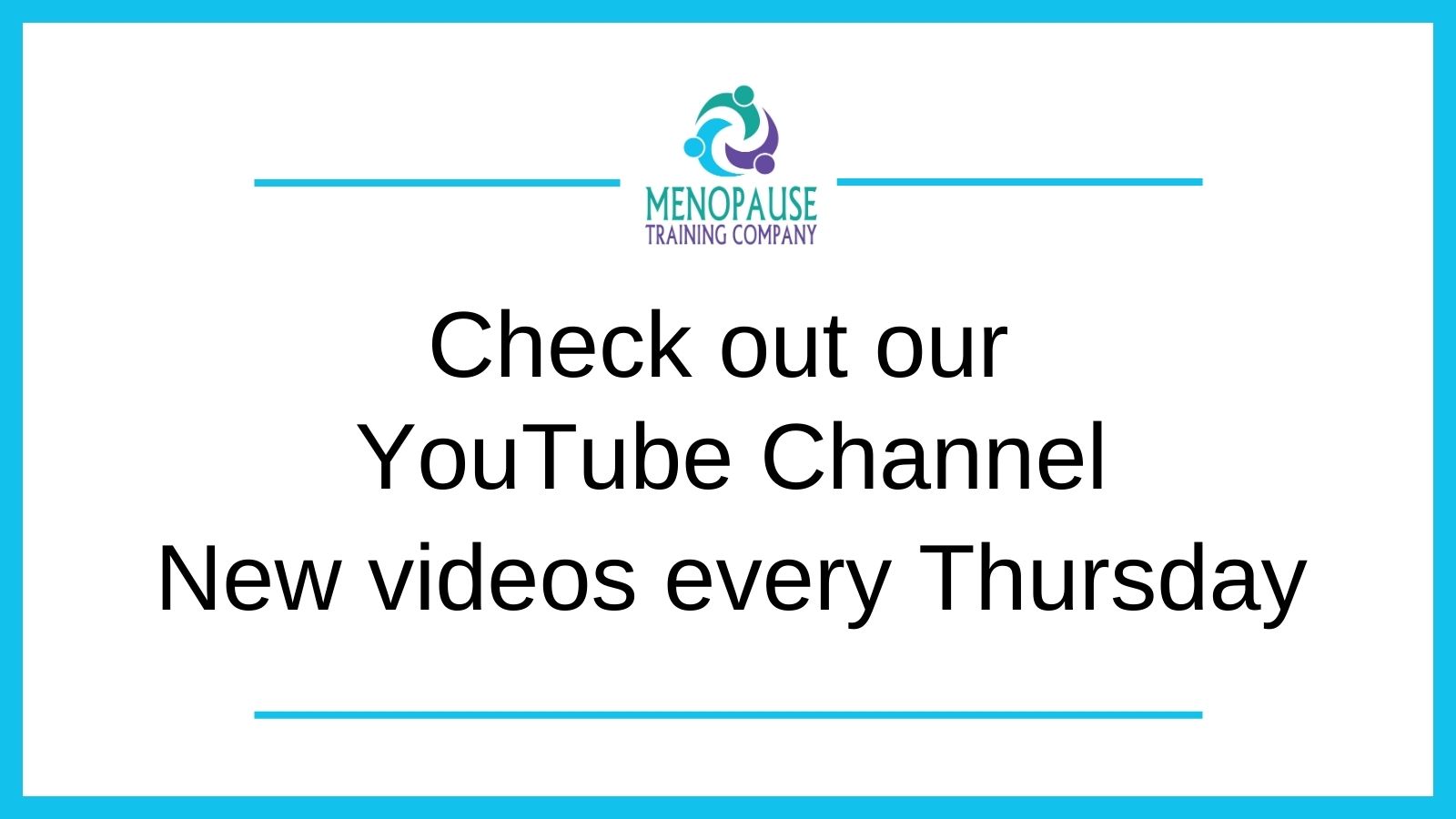 Blogs and articles to help you create a menopause friendly workplace.

Some of the topics covered: