Perhaps you’re wondering what good reasons could there be to writing, creating and implementing your menopause policy.

Is a menopause policy right for your workplace, business or organisation?

Do you need one?

In this blog I’m going to share with you 5 really good reasons a menopause policy is worth considering for your workplace.

Good reason #1: It’s a good resource for all colleagues

A menopause policy helps you to provide clarity around menopause for everyone in your workplace.

For colleagues who are struggling with their menopause-related symptoms your  policy can outline what support is available for them, who to contact within the organisation, what’s expected of them and where they can go to get more support and help for their symptoms.

It can outline for them what support is available from the organisation, information about menopause symptoms and the relevant laws they need to be aware of.

It encourages you to review and update other workplace policies you have.

Because when you decide a standalone menopause policy is for you, you’ll also remember you have a variety of other workplace policies that may need to be updated to include adjustment that take account of menopause and menopause-related symptoms.

Good reason #3: It could save you time and money

Writing your menopause policy could save you time and money in the long run.

When you have you menopause policy you can outline how you will support those struggling with their menopause-related symptoms and where they can go to get additional support.

Your menopause policy can also reduce the risk to the business or organisation being taken to an expensive and public Employment Tribunal.

Let’s not forget the cost of replacing colleagues that decide to leave or reduce their hours because they’re struggling with menopause-related symptoms.

The Menopause Survey taken in 2018 spoke to 6315 women and discovered:

And more recently, in 2022 a menopause survey of over 4,000 women for a Channel 4 documentary, Davina McCall: Sex, Mind and The Menopause, the survey found that 1 in 10 women who have worked while going through menopause have quit their job directly because of their symptoms.

All down to their menopause-related symptoms.

An additional 13 per cent of women who have been employed while going through the menopause say they have considered leaving their job.

To replace this lost talent there’s the:

By writing and implementing your menopause policy at work, you can help to ensure that all members of staff affected by menopause-related symptoms feel supported, listened to and understood by their managers and colleagues.

When you have a menopause policy they’ll also know they will be treated fairly by the business or organisation.

People are assets in your business.

You want to keep your valuable and talented staff

A robust and menopause policy that’s implemented and not left gathering dust is a bonus for your business.

It can certainly make it a more attractive place to work.

With all the talk about menopause right now it wouldn’t do you any harm to be seen as a forward-thinking business.

Good reason #5: It helps to remove the taboo

Menopause in the workplace is one of the last remaining taboos.

Writing and implementing your menopause policy can help you and your organisation:

Want to know more about menopause awareness training for your workplace?

Who is menopause awareness training for?

What topics are covered by menopause awareness training?

Our checklist covers the main topics and information you need to include in your menopause policy.

IMPORTANT – The Menopause Training Company content is for guidance only and should not be relied upon for legal advice.
The law may change from the date of me publishing this content. Always acquire your own legal advice.
The content I create explains and outlines the laws that apply to England, Wales and Scotland. Northern Ireland employment law varies.

The posts you requested could not be found. Try changing your module settings or create some new posts. 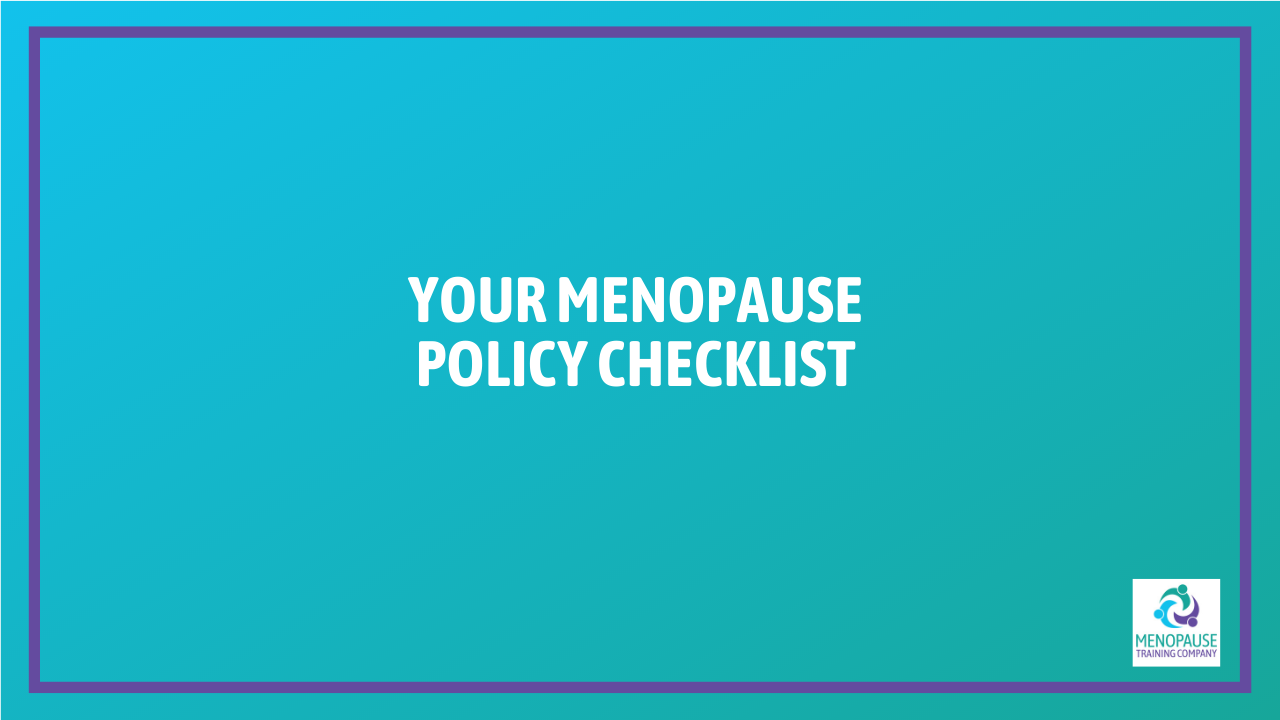